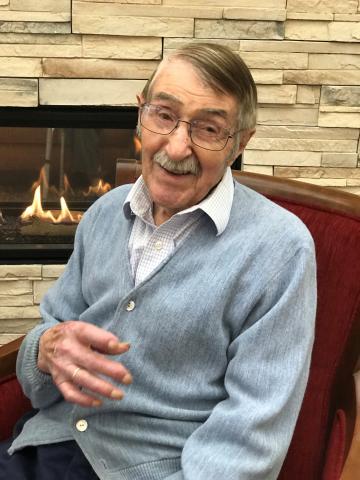 Clarence C. Glauner marked his 110th birthday Sunday with a simple celebration due to the coronavirus pandemic.

Few Americans reach the milestone; only 330 supercentenarians — those 110 and older — were reported in the 2010 U.S. Census. So Glauner, who is thought to be the third-oldest person in the U.S., according to the110club.com, anticipated lots of fanfare and a big celebration with family and friends.

Instead, he spent his birthday quietly with a cake and just a few staff from The Highlands of Wyomissing, where he has lived since 1990.

“We were going to have a big party on Saturday,” Glauner said in a phone interview Tuesday, “but because of the virus, it got called off. They are planning a party for after the virus is gone.”

The delay doesn’t bother Glauner. He is not in a hurry, he said.

Clarence C. "Dutch" Glauner of The Highlands of Wyomissing reached his 110th birthday Sunday and he can prove it. This is his 1910 birth certificate.

Born March 22, 1910, the third of eight children of George and Mary (Cairns) Glauner, he made it into his first U.S. census in 1910 at the age of three weeks, and has appeared in every count since then. He will be counted again this year as the Highlands “is working with the census bureau as a whole,” said Jodi Gibble, director of marketing for the senior living community.

Clarence Glauner attributes his longevity to a combination of good genes and a lifetime of work, activity and healthy eating. He spent his early years on the family farm outside Honey Brook, Chester County.

Amish neighbors gave him the lifelong nickname “Dutch,” due to the colloquial speech patterns he picked up, despite his mother being of Irish ancestry and the family not speaking Pennsylvania Dutch.

He and his siblings had plenty of chores on the farm, but there was time for fun, too. When the work was done, they played outdoor games with other farm kids. His favorites were hide-and-go-seek and kick the wicket, a game played by kicking a stick and running to tree-marked bases.

Though Glauner was only 8 years old during the 1918 influenza pandemic, he remembers it well. His father and several siblings were affected and bedridden.

“We had a big farm and my dad was down,” he said, “so my dad’s brother, a bachelor, came and helped us out until my dad could get back on his feet.”

Today’s coronavirus is different from the flu and seems to spread faster, he said, noting that he understands and appreciates the precautionary recommendations for social distancing and staying at home.

Clarence C. Glauner is at far left in this undated family photo taken in the early 20th century on the Glauners' Chester County farm. Glauner turned 110 on March 22.

Glauner recalled how loving, kind and gentle his father was, not only to his children, but to others and the farm animals in his care. George Glauner survived the flu, but died just four years later in 1922 at age 42.

“It was a shame he didn’t have more time,” Glauner said, noting his own longevity comes from his mother’s side. Mary Glauner lived to be 99 and died in 1980 just short of her 100th birthday.

Through his long life, Glauner witnessed many historical events, including World War I and the Great Depression. At age 30 in 1940, he registered for the draft, but as a sheet metal worker — a reserved occupation — he was exempt from service during World War II.

Supercentenarian Clarence Glauner hoped to celebrate his 110th birthday Sunday with a big bash, but due to COVID-19 precautions, he settled for cake with staff of The Highlands of Wyomissing, where he resides.

He also tried his hand at several other jobs, including dairy farming and metal roofing, before becoming a plumber’s apprentice, which eventually led to opening his own plumbing service, C.C. Glauner, in 1945.

Glauner retired in 1980, but stayed active, maintaining the rental properties he bought and managed.

“He was still shoveling snow at his rental properties in his 90s,” Gibble said.

In his leisure time, Glauner enjoyed hunting and fishing, but gave them up a few years ago. He misses the outdoor activity, he said, but still gardens at the farm he and his wife, Margaret “Peg” (Armstrong), bought in Dushore, Sullivan County. Their son, Leroy, owns the farm now.

Clarence and Peg married in April 1930, and had two children, a boy and girl they called Buddy and Betty.

Glauner also has two grandchildren, a great-grandson and great-great granddaughter and looks forward to celebrating his birthday with them after the current health crisis passes.

Asked if he had any advice for young people today, Glauner said, “Grow up, be a man, be a woman, and hold up your head. Be a really good person, be honest, get an education, and have a good family.”