Introducing The Vistas at Fox Hill.

The Vistas at Fox Hill, our newest Residential Living option, is coming soon. Be among the first to reserve your spot by placing a 10% deposit – giving you exclusive access to our depositor club, The Fox Hill Society, and all its benefits.

Getting to Know our Residents... Paul Hetrich 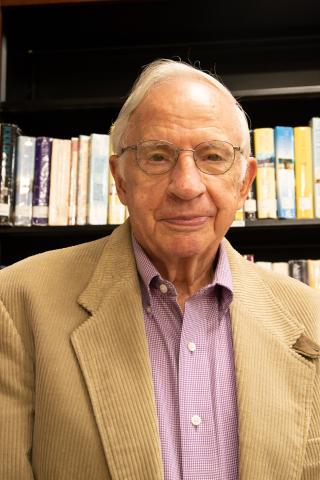 Reverend Paul Hetrich was born on May 3rd, 1934 at the Reading Hospital. His mother and father, 43 and 48 at the time, lived as farmers close to what's now Willow Hollow Golf Course. Soon after Paul's birth they relocated to Penn Avenue in West Reading. Paul did not have the most ideal childhood growing up. At a young age he had ear problems and at four years old, Paul and his two parents moved to Laureldale, where after a few years his mother was diagnosed with cancer. With his mother stricken with illness, Paul and his father cared for her from home. A few years later his mom sadly passed away when he was only 13. Despite the loss of his mother, Paul persevered with the help of other role models.

From a young age, Paul was very involved in his church, Rosedale United Church of Christ. He sang in the church choir, participated in retreats and played a lot of basketball. Betty Evans, a director of youth ministries at the church, became a significant mentor and motherly figure for Paul. While attending Muhlenberg School District, Paul found other role models in athletes and coaches, one being Coach Scoop Clemmons. .

In his high school years Paul worked at a local dry cleaner in his hometown, this helped him save for college. One interesting story took place the day of Paul's high school graduation, he was arrested! Paul had worked earlier in the day and the police questioned him about valuables missing from a coffee table. Suddenly the phone rang, it was the woman who reported the theft. Deeply embarrassed, she stated that the valuables had been discarded in a waste basket with the wrappings from her cleaned and pressed garments leaving Paul free to go but late to his graduation.

As Paul began to prepare for life after high school, he believed he would attend Kutztown University and eventually become a teacher and coach. However, God speaks in unusual ways. While on a Sunday school retreat, one of his mentors Minie Diefenderfer said, "Paul you're going to be a Preacher." Following this conversation, she asked Paul to visit Albright College, where he felt his calling to ministry. Soon after, Paul became an Albright student and majored in History and Theology.

The next part of Paul's journey began at Albright College where he became increasingly involved in ministry. Around this time, he and his former high school sweetheart, Barbara Ann Warmer, renewed their relationship and were married a year later. Barbara is and always will be, the one who has made the greatest and most wonderful impact on his life. Paul always worrying about the future and what's next, Barbara was there to remind him, "Don't plan everything for tomorrow, enjoy today."

To continue his growth in ministry Paul studied Theology at Yale. Paul was working up to 38 hours a week with all the money going to his tuition. After graduate school, Paul along with the senior pastor of the Branford United Church of Christ, with whom he worked, began teaching at Yale Divinity School as adjunct professors. He brought his ministry skills not only to Connecticut and Philadelphia but onto a larger field through the Board for World Ministries of the United Church of Christ.

Paul and Barbara visited Europe and Russia, the Middle East and Asia as well, but his favorite spot became a small island in the Pacific Ocean. Micronesia has held a special place in Paul's heart since he first visited in 1986. With the help of his wife Barbara, together they opened a school in the small nation. The extraordinary pieces of artwork that he exhibits today illustrate the country's unique culture. Everything is made from hand: their houses, clothing, and artwork made from shells. Paul and Barbara have been to the island an astounding 16 times and both feel like they have built family relationships there.

Paul has lived by the motto "do everything to the best of your ability, regardless of what you're doing." He says the tail end of his journey has been wonderful here at The Highlands. With caring and supportive staff, Paul cherishes having them around to help, but still has the independence to do what he wants and stay involved. Paul says he "didn't come here to die, but to live," which is displayed by yet another trip this past winter to friends from Micronesia who migrated to the Hawaiian Islands. While Paul may have had a rough start in his earlier life, he still made the best of it. Making countless lifelong impressions on people through his ministries, Paul Hetrich is one person everyone should admire.