History of the Farmhouse at The Highlands at Wyomissing 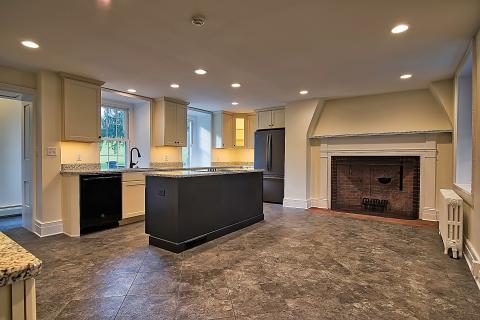 The story of this historic farmstead, now owned by the Highlands at Wyomissing and used as a residential residence, begins with the earliest European settler along the Wyomissing Creek, Welsh "Baptist" Hugh Jones. In 1726, Jones chose the over 1,000 acres originally comprising this homestead. He and his family, including a young son David, moved from Chester County and settled here by 1728. In 1745, David Jones patented 264 acres of the land he inherited when his father died in 1734, but soon sold it and lands inherited from his father before returning to Chester County with his wife and young family. The tract was subsequently owned by David's uncle, John Pugh, and various families until it was acquired by John Hill in the mid l840's.  Hill constructed the present farmhouse, barn and springhouse from a yellow-tinged limestone, quarried nearby.

The large bank barn with date stone reading "John and Elenora Hill 1856," is typical of its time period. The traditional springhouse/ summer kitchen was originally banked over a spring in the lower level with a work area and fireplace in the upper level. It underwent alteration in the early 20th century when the ground level was raised and a system was installed to pump water to the house.  The handsome limestone house is a fine example of a classic side-passage, late Federal structure, with its three bays and double-hung sash windows. Upon entry, a central hall with graceful stairway leads upstairs. To the right is an elegant parlor, beyond which lies the dining room with its traditional corner cupboard. Both rooms feature finely executed crown molding and other woodwork.

The earliest section, built in the mid­ to-late 18th century, forms the kitchen at the rear of the main house. With its large cooking fireplace and attached bake oven/smokehouse complex, this once-freestanding small cabin provides clues to its antiquity with an adze-marked summer beam, massive fireplace foundation, and evidence of a former box-winder staircase.

The newest section encompasses- a master bedroom, master bath and laundry on the first floor.  The present occupants appreciate all the modern amenities of their elegant and comfortable home, while enjoying its long history in a sweepingly picturesque setting with the sights and sounds of the gently-flowing Wyomissing creek below.